TAKE A FEW MINUTES TO SEE SOMETHING DIFFERENT 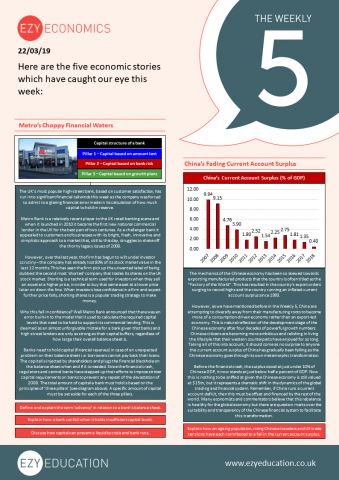 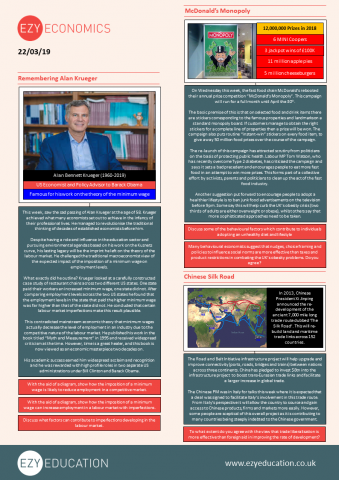 It's Friday, which means the Weekly 5 is back in another action packed edition! If anyone is unfamiliar with this regular feature it aims to provide you with a short summary of some of the most significant and interesting stories of the week across and within economics around the world. This helps keep you up to date with the news, whilst at the same time provide you with examples of economic theories and policies in action in the real world.

This week's top 5 Economics stories, as chosen by our EzyEconomics team:

Metro Bank Capital Blunders - Challenger bank Metro made a massive miscalculation on their capital buffers, why does capital and how can it stave off a liquidity crisis?

China's Trade Transformation - China could record a current account deficit for the first time since 1993, what would be the implications of this?

McDonald's Game of Monopoly - McDonald's have rebooted their prize draw campaign, is this an economically unethical policy to pursue?

Chinese Road and Belt Initiative - China's goal to introduce a 7,000 mile trade route connecting Asia and Europe moved another step closer this week, what are the economic consequences of this?

Alan Krueger - We take a look at the work and influence of US economist Alan Krueger who passed away this week.

For each topic, we have designed a question to help your students use the skills they have developed in class and apply them to real-world situations.

Stay tuned for further editions of the Weekly 5 released on Friday's during term time! Year 12 Recap - Subsidies
EzyEconomics Blog
This Year 12 Recap video centers around the topic of Producer Subsidies.Subsidies are one of the central policy tools which can be used by a government to influence the outcome in the market to h...
5000 hits
0 comments
Read More
05 November 2018

IKEA Expansion plan - don't forget the meatballs!
EzyBusiness Blog
I am sure I am not alone in describing the pain, anguish and untold stress of being dragged through one of IKEA’s large factory-sized stores, looking for that one remaining household item to complete ...
3664 hits
0 comments
Read More
10 May 2019 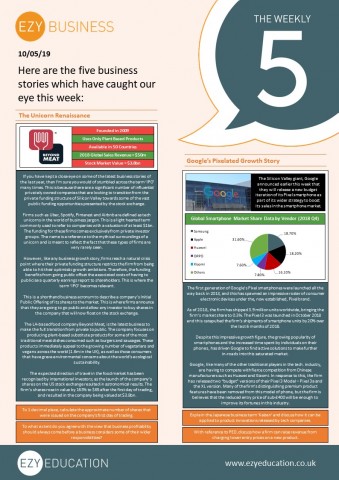 Countdown to Exams - Day 14 - Linear equations
EzyMaths Blog
On day 14, we are still looking at the Algebra section paying attention to Linear Equations. Here we start with creating linear equations that will enable you to calculate the value of the unknow...
7174 hits
0 comments
Read More
21 May 2018 Exam tips.
EzyMaths Blog
We have put together a list of the formulae required for the exam that you need to memorise. We have also put together a little list of tips to help with your exam preparation....
10558 hits
0 comments
Read More